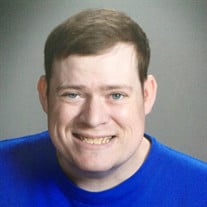 Visitation for Sean Michael Kremer, 36, will be from 3 to 8 p.m. Sunday, at Matz Funeral Home, 410 E. Rand Road, Mount Prospect. Prayers will be said at 9:30 a.m. Monday, at the funeral home, proceeding to St. Emily Church, 1400 E. Central Road, Mount Prospect, for Mass at 10 a.m. Interment will be in Mount Carmel Cemetery, Hillside. Born Jan. 22, 1981, in Waukegan, he died Aug. 10, 2017, at home. Sean’s indelible spirit will always be remembered through all of his artwork. He was given the opportunity to draw his favorite characters at the Disney Animation Studios for a day, which made his dream come true. Sean was a Special Olympics athlete, participating and winning awards in many sports, and was a true embodiment of their oath: “Let me win, but if I cannot win, let me be brave in the attempt.” He was the loving son of Thomas and Mary Jean Kremer; dear brother of Patrick (Beth) and Brian (Kristen); fond uncle of Jack, Charlie and Finn; nephew of Lorine (David) Lloyd, Joan (Joe) Carattini and the late Marilyn (Lad) Kracalik. In lieu of flowers, memorials to Northwest Special Recreation Association 3000 W. Central Road, Suite 205, Rolling Meadows,IL60008.

The family of Sean Michael Kremer created this Life Tributes page to make it easy to share your memories.

Send flowers to the Kremer family.