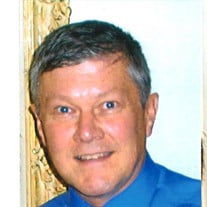 Robert "Bob" C. Johnson, of Prospect Heights, Il, formerly of Delaware, OH, age 66, passed away on Thursday, May 26, 2022, surrounded by his loving family. He was born on August 4, 1955 in Chicago, IL to Henry and Patricia (Eckert) Johnson. Bob met his wife, Mary Jo, while the two were in high school at a co-ed sockhop. They were married in Chicago on November 28, 1976. The couple had four children together and were married for 45 years. Bob absolutely adored his wife, and even in the throes of his illness, he remembered his wife and how much he loved her. Bob served his country in the Army as a Military Police Officer from 1976 until his honorable discharge in 1982. He was a police officer for the Delaware Police Department in Delaware, OH and retired after 27 years of service. A life-long learner, Bob spent his retirement becoming a yoga instructor and a massage therapist. He was always involved in the community and enjoyed volunteering for the Special Olympics. He also participated annually in the Polar Bear Plunge and the Torch Run. In his free time, Bob also enjoyed being outdoors with his family, especially fishing at the family home in Ohio. Bob will be remembered by his loved ones as being patient and sincere, never raising his voice. He was a very generous man with his time. He thought he was very funny, and he always tried to make his family laugh. He was a beloved husband, father, Papa, and friend, and will be missed by many. Bob is survived by his wife, Mary Jo; children, Scott (Beth), Jennifer, Eric (Marissa), and Leslie (Zach) Allen; grandchildren, Madeline, Gabriella, Lucas, and Emilia; sister, Donna Willer, and parents-in-law, Pat and Joan Napoleon. He was preceded in death by his parents; and his brother-in-law, Jeff Willer. A Mass of Christian Burial will be held on Tuesday, May 31, 2022, at St. Alphonsus Liguori Catholic Church, 411 N Wheeling Road, Prospect Heights, Il at 11a.m. Visitation will be held from 9:30 until the time of Mass. Interment will be held at a later date. In lieu of flowers, memorial donations may be made in Bob's name to The Michael J. Fox Foundation for Parkinson's Research, P.O. Box 5014, Hagerstown, MD 21741-5014, or online at www.michaeljfox.org/donate.

Robert "Bob" C. Johnson, of Prospect Heights, Il, formerly of Delaware, OH, age 66, passed away on Thursday, May 26, 2022, surrounded by his loving family. He was born on August 4, 1955 in Chicago, IL to Henry and Patricia (Eckert) Johnson. Bob... View Obituary & Service Information

The family of Robert "Bob" C. Johnson created this Life Tributes page to make it easy to share your memories.

Send flowers to the Johnson family.