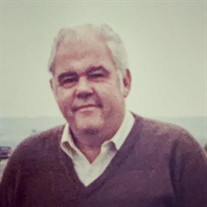 Richard Peter Hamlin, 88, passed away peacefully at Sarasota Memorial Hospital on Friday, August 21, 2020. Born in Chicago in 1932 to Peter Hamlin and Edna (Newberg) Hamlin, Richard grew up in Chicago and Wisconsin. He had a lifelong love of living near water and enjoyed boating and fishing. He was a long-time resident of Northfield, IL, Kenosha, WI, and Sarasota, FL, but always had special connections to Andersonville given his Swedish family members’ roles in construction and development. After graduating from Northwestern Military Academy in Lake Geneva, WI, Richard attended Purdue University. He earned a bachelor’s degree in Engineering in 1954, and was a member of the Sigma Nu fraternity. He also met his future wife, Jane Hamlin, at Purdue and they married in Washington DC in 1956. Richard completed an MBA degree in 1958 at Northwestern University Kellogg School of Management. He also served in the Army at Fort Meade in 1954-1956. He worked for 43 years as an investment advisor starting with Blunt, Ellis & Simmons and retiring from Raymond James Financial in 2014. Richard had many interests including travel, education, music and the arts. He was a supporter of Purdue University, Northwestern University, The National Cathedral and St. Paul's Episcopal Church in Milwaukee. He was a member of Sigma Nu and Phi Tau Sigma fraternity, and Brighton Dale Golf Club. His generosity has been widespread for more than 50 years. Most important to Richard was his faith and love of family. He enjoyed entertaining family and friends at his home and hosting his extended family from Sweden and Washington, D.C. Many summers were spent with his children and nephews and nieces at Bethany Beach, MD or Mercer, WI, where Richard could be counted on for memorable dinners and picnics. He is survived by his loving wife Jane Hamlin, his daughter Diane Hamlin, son Peter Hamlin and daughter-in-law Cathy O'Bryan, son David Hamlin, and daughter Andrea Hamlin. Family and Friends Please Gather at Ridgewood Memorial Park Inside The Cemetery Gate at 10:15 - 10:30 am For Procession To Graveside Service.

Richard Peter Hamlin, 88, passed away peacefully at Sarasota Memorial Hospital on Friday, August 21, 2020. Born in Chicago in 1932 to Peter Hamlin and Edna (Newberg) Hamlin, Richard grew up in Chicago and Wisconsin. He had a lifelong love of... View Obituary & Service Information

The family of Richard Peter Hamlin created this Life Tributes page to make it easy to share your memories.

Send flowers to the Hamlin family.