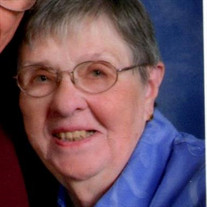 Mary Cecelia Giroux (nee Cawley) passed away March 15, 2018 at age 83. Beloved daughter of John and Marion Cawley (nee Egan) and stepdaughter of June Cawley (nee Woods), and dear sister of the late Joan Adams. Devoted wife of Charles for 56 years; loving mother of June Rzepczynski (Mark), Barbara-Ann Gustaferro (Mark), and Mary Carroll Sincic; doting grandmother of Mary, John, Mark, Joseph, and Henry; loving cousin of the late John (“Jack”) Cawley and the late Kathryn (Wilson) Cook; fond aunt to many. A West Side Irishwoman, Mary graduated Oak Park Hospital’s nursing program as a registered nurse, a designation in which she would take lifelong pride. It was as a nurse at Loyola’s dental school that she met her husband Chuck, then a dental student, with whom she would establish her home and family in Des Plaines. They joined the St. Stephen’s parish community, where Mary became a decades-long member of the Rosary & Altar Society and St. Patrick’s Guild, distributed communion at 5:00 mass, and volunteered as school nurse. Herself the daughter of an educated woman, Mary prioritized her daughters’ education above all else, and made whatever sacrifice was necessary to ensure their Catholic education and college studies. Having proudly attended her daughters’ undergraduate graduation ceremonies, Mary fulfilled her own lifetime dream of attaining a bachelor’s degree, which she received from the College of St. Francis at the age of 57. She loved Notre Dame, Hawaii, a good novel, a chocolate donut paired with salami, watching her daytime “stories” and the dispensing of justice by Judge Judy, and a nice long chat with anyone. Her friends and family all received her faithful check-ins, and were remembered in her daily novena to St. Joseph. Above all else she rejoiced in her grandchildren, whom she always told she loved “a bushel and a peck.” The family will receive friends on Saturday, March 24, at 9 a.m. at St. Stephen Protomartyr Church, 1280 E. Prospect Ave., Des Plaines. A funeral Mass will start at 10 a.m. Burial will follow at Queen of Heaven Cemetery, Hillside,IL

The family of Mary C. Giroux created this Life Tributes page to make it easy to share your memories.

Send flowers to the Giroux family.