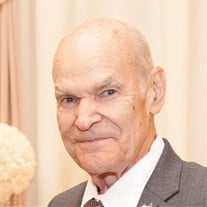 Kenneth C. Steckling, 83, a longtime resident of Prospect Heights, IL, died surrounded by his family on Friday, December 16, 2016, after a courageous 16-year battle with leukemia. He is survived by his wife of 60 years, Donna (née Fischer) Steckling; his son, Bill (Carol) Steckling; daughters Lynda Collins and Janet (Tom) Reed; grandchildren Brock (Lauren) Collins, Eric (Liz) Steckling, Andy Steckling, Alyssa (Manuel) Moreno, Matt Steckling, Brandon Reed and Melanie Reed; and his beloved and loyal dachshund Otto. Ken was born February 3, 1933, in Evanston, IL. He grew up in Chicago and attended Senn High School and Washburn Trade School for pipefitting. He was preceded in death by his parents, Willard and Dorothy (Hiertz) Steckling, along with sister Dorothy Jean (the late Richard) Minarsch. A loyal member of Chicago Pipefitters Local 597, after retirement from a 36-year career with Honeywell, he worked at Prospect Heights School District 23. From woodworking to boating, building a log cabin to restoring antique cars, Ken was the master of anything he put his mind to. He was genuinely proud of the accomplishments of his children and grandchildren. He believed in the paths that they were following, and being a great provider, was generous when it counted most. His character made those around him want to succeed. A master of all trades, a tradesman at heart, a king of one-liners and a world traveler, this strong and caring man, who viewed dachshunds as the superior breed (because they are) will be sorely missed by family and friends. Visitation will be Tuesday, Dec. 20, 3-9 p.m., at Matz Funeral Home, 410 E. Rand Road, Mt. Prospect, IL 60056. Service will be Wednesday, Dec. 21, 11 a.m., at the funeral home. Burial to follow at Memory Gardens Cemetery, 2501 E. Euclid Ave., Arlington Heights, IL 60004

Kenneth C. Steckling, 83, a longtime resident of Prospect Heights, IL, died surrounded by his family on Friday, December 16, 2016, after a courageous 16-year battle with leukemia. He is survived by his wife of 60 years, Donna (née Fischer)... View Obituary & Service Information

The family of Kenneth C. Steckling created this Life Tributes page to make it easy to share your memories.

Send flowers to the Steckling family.