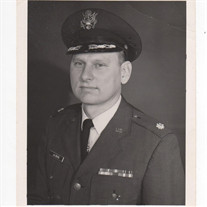 Col. Joseph Kasmer LaBerg, age 86, of DesPlaines, for 56 years.he died October 11,2015. Born May 31, 1929,to Joseph C. and Rose(Suchwalko) La Berg,in Chicago. Joe attended St. James Grammar School in Chicago and graduated from Steinmetz High School, and enlisted in the Army Air Force for 3 years, where he attained the rank of Sgt. Under the WWII G.I. Bill, he attended Wright Jr. College for 2 years, then transferred to Bradley University in Peoria where he obtained a BA degree in Management and Accounting, and was also commissioned a 2nd Lt. from the AFROTC program. He was called to active duty and attended Flight Training during the Korean War. He was released from AD and remained in the AF Reserve program joining the Air National Guard 126th Air Refueling Wing and retired after 26 years in the ANG with 34 years of military service, and attained the rank of Colonel. He married his loving wife, Gloria (nee Zerfahs) in 1956 and they are the proud parents of John (Jackie), and Joanne Marie (Bruce) Talbot. He and Gloria are the dear grandparents of seven grandchildren, Jonathan, Jarett and Jennings La Berg and Brian, Mary Claire, Stephen and Peter Talbot. Joe and Gloria had been married 59 years. He was preceded in death by his parents; and his sister, Dorothy (Vincent) Valunas. Visitation Wednesday, Oct. 14, 4 to 9 p.m. at Matz Funeral Home, 410 E. Rand Road, Mount Prospect. Funeral Thursday, 9:30 a.m. from the funeral home to St. Emily Church, for 10 a.m. Mass. Interment St. Adalbert Cemetery. In lieu of flowers, memorials to Pro-Life Women’s Center, 5116 N. Cicero, Chicago, IL 60630 or Masses are appreciated.

The family of Colonel Joseph Kasmer La Berg created this Life Tributes page to make it easy to share your memories.