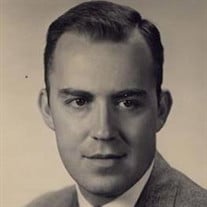 John "Jack" Toomey, age 84, beloved husband of Julia passed away peacefully on August 28, 2016 surrounded by his loving wife and their six children. Jack is survived by his children: James (Patricia), Jane, William, Margaret (David), Kathryn (Michael), and John (Jennifer); Grandchildren: Bridget, Kevin, Michael, William, Julie, Emerson, Christopher, Timothy, Declan, and Mitchell; Brother: James (Carol Ann); Sister in law: Mary Marowally, cousins, nieces, nephews and his many, many friends. Raised in Oak Park, Illinois. Jack attended grammar school at St. Catherine of Siena and went on to Campion High School, a boarding school in Wisconsin. Upon graduation, Jack was awarded a 4-year scholarship to Loyola University from a competitive examination and graduated in 1954. Education was his legacy, and he imparted his passion for learning on all of his children. He never revealed the depths of his sacrifice when he put all six children through private schools and post-graduate education. He was fiercely proud of his children and their accomplishments. From 1955-1957, Jack served in the Army as first lieutenant at Fort Hood, Texas. Jack and Julie were married in 1957 and were longtime residents of Park Ridge, Illinois where they raised their 6 children and were deeply involved in St. Paul of the Cross Parish for over 40 years. Jack worked as a Sales Manager for a Packaging Company for over 30 years. In retirement, they split their time between Prospect Heights, Illinois and North Fort Meyers, Florida. Jack and Julie enjoyed traveling. When their children were young they had many road trip adventures. As they became empty nesters, they traveled the world together and were able to visit Europe many times. Jack’s favorite trip was to China. In his retirement, Jack had a very active social life. He enjoyed playing golf, tinkering with computers, taking classes, and having lunch with his many friends. He especially loved wintering in Florida and sharing that experience with his children and grandchildren when they visited each year. Jack took great pride in celebrating family and the accomplishments of his children and grandchildren. Jack’s quick wit and broad smile filled a room. He was adept at human nature; like it or not, he often knew your opinions before you did. He always found something special in each of his children: not the glitter of star power but the simple honesty of the human heart. Jack’s life continues to be celebrated by everyone who knew him, he will be missed greatly by us all.

The family of John R. Toomey created this Life Tributes page to make it easy to share your memories.

Send flowers to the Toomey family.