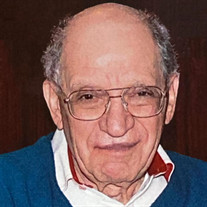 John Anthony Fote October 17, 1917 – May 30, 2022 John A. Fote of Mt. Prospect, formerly of Philadelphia, PA, passed away peacefully at the age of 104 on Memorial Day, May 30, 2022. The son of Italian immigrants, John was born on October 17, 1917 in Philadelphia, PA. He was the second oldest of six siblings, and he grew up in a narrow row house on Reed Street in Center City Philadelphia. He married Madeline in 1940, and they remained married for 78 years until his beloved wife’s death in 2018 at her young age of 100. John served in the US Army in Germany during WWII. John worked the majority of his civilian life at the Frankford Arsenal in the Motor Pool until his retirement in 1974. He has two children, four grandchildren, and nine great-grandchildren. John is survived by his sister Sarah (the late Frank) Salandria, daughter Mary (Pete) Skittone and son, Alfred (Victoria Myers) Fote. Proud grandfather of John, Karen (Angelo) Petratos and the late Peter (Brenda) and Joseph Skittone. Fond great-grandfather of Angela, Mary Rose, Amanda, Genevieve, Michael, Joe and Cece Skittone and David and Laura Petratos. He was preceded in death by his wife Madeline, his parents Maria and Alfio, and his siblings, Ida (Rosario) Amato, Pete, Alfred (Rita) and Valentino (Rita). According to Barrett Jr High School’s year book: “John was one of the most studious of the industrial boys in class. Although he was forced to drop out of the class as a sophomore through unavoidable circumstances (to work to help his parents during some hard financial times). He studied all the more when he returned and recovered the lost ground to catch up with his class.” John graduated from Central High School in 1936. Graduating from High School was a rare achievement during that time. Central High School is regarded as one of the top public schools in the nation due to its high academic standards. The school requires exceptional grades for enrollment. It was founded in 1836 “the crowning glory of Philadelphia’s public schools.” John met his wife Madeline in November, 1935. John’s sister Ida was at home awaiting the arrival of her boyfriend Rosario, who was meeting John and Ida’s parents for the first time. John was leaving for the evening as Rosario arrived with his sister Madeline, who had come with Rosario for support. John’s eyes met Madeline and he quickly turned around and walked back into the house where John and Madeline made goo goo eyes at each other the entire evening. It was love at first sight. They married 5 years later in 1940 and remained devoted to each other throughout their marriage and raised two children. In 2016, John and Madeline were recognized as the "longest married couple" living in the state of Illinois. After working several short-term jobs during the Great Depression, John found his career at Frankford Arsenal in the Motor Pool beginning in 1941. He was granted a leave of absence to serve his country in the US Army during WWII. John returned to Frankford Arsenal in 1946 where he advanced from automobile mechanic to his eventual position as foreman of the Motor Pool Branch. In 1960, his 18 year-old daughter Mary began working in a different building at the Frankford Arsenal. For years, John and daughter Mary enjoyed daily drives to and from work together. As foreman, John would often take calls from the Company Commander, Pete, who routinely needed assistance with the maintenance of military vehicles. That nice young officer would later become John's son-in-law. After his retirement in 1974, John and Madeline enjoyed visiting various vacation spots around the world. In 2002 they relocated to Illinois where they spent many enjoyable years celebrating the big and little milestones of life with their daughter, son-in-law, grandchildren and greatgrandchildren. John was a very gentle human being with a dry sense of humor and an infectious laugh. He loved music, playing pinochle with his friends, golfing, going to the shows and being with family. A Mass of Christian Burial will be held on Friday June 3, 2022, at St. Thomas Becket Catholic Church, 1321 N Burning Bush Lane, Mount Prospect, Il at 11am. Visitation will be held from10am until the time of mass. Procession to All Saints Catholic Cemetery after the mass. If you are unable to attend the services for Mr. John A. Fote, please use the link below to access the live stream. https://www.facebook.com/stthomasbecketmp/?ref=page_internal

The family of John A. Fote created this Life Tributes page to make it easy to share your memories.

Send flowers to the Fote family.