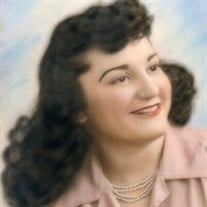 Lake Zurich, IL – Jennie R. Dornseifer, 93 died on December 27th 2021, following injuries she sustained from a falling accident earlier in the week.   She was born on May 25th, 1928 in Chicago, Illinois, the daughter of Salvatore and Della DeMarie. She attended St. Callistus School.  She began her working career as a teenager in various factories to support the war effort during World War II.  Later, she worked for W.W. Grainger in an office setting. In later years she owned and managed a restaurant- tavern called Westphalia with her husband Josef Dornseifer who had predeceased her.  She was also predeceased by her loving daughter, Barbara Roben as well as her brothers which include Sam, Frank, Donald, and Joseph DeMarie, and her two sisters, Antoinette Walsh and Marie King. Surviving include her sons Earl Roben and his wife Shahin,  Thomas Roben, his wife Linda, and Irving Dornseifer, his wife Oon-Chi, and her daughter Karen Dornseifer.  Her grandchildren include Christopher Roben, his wife Sherri, Rachael Roben, Zachary Roben, Louis Dornseifer, and Diana Dornseifer.  Her great grandchildren include Hunter, Brooke, Gavin, and Ashton Roben.  Also, surviving include her brothers Cuneo DeMarie, his wife Mary, and  Louis Maschio, his wife Linda, her sister-in-laws Mary Ann DeMarie and Fran Maschio as well as numerous nieces and nephews. Although Jennie had only completed an elementary education, she was very street wise and she became a savvy property manager/owner.  She was a loving mother, grandmother, sister, aunt, and friend to everyone whose life she touched.  She brought so much joy, happiness, and kindness to others.  She was an amazing cook with an eclectic collection of ethnic cuisines including Italian, Mexican, German and country cooking.  Mostly, she was known to be an extraordinary baker, always bringing two or three different pies to any family gathering.  In lieu of flowers donations to St. Jude Research Hospital will be appreciated. To send a flower arrangement or to plant trees in memory of Jennie Rose Dornseifer, please click here to visit our Sympathy Store. To plant Memorial Trees in memory of Jennie Rose Dornseifer, please click here to visit our Sympathy Store. There are no gallery images. #recaptcha-container label { display: none } Upload a Photo Label: * Image: * Gallery: Obituary Photos Required Confirmation: Upload Gallery Image

Lake Zurich, IL &#8211; Jennie R. Dornseifer, 93 died on December 27th 2021, following injuries she sustained from a falling accident earlier in the week.   She was born on May 25th, 1928 in Chicago, Illinois, the daughter of Salvatore and Della... View Obituary & Service Information

The family of Jennie Rose Dornseifer created this Life Tributes page to make it easy to share your memories.

Send flowers to the Dornseifer family.