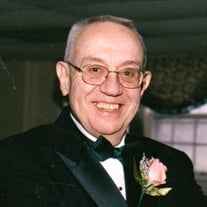 George M. Maza, 86, of Mount Prospect, IL, passed away on Monday, February 8, 2021, at Advocate Lutheran General Hospital after a long and brave battle with cancer. George was born in Newark, NJ, on December 25, 1934, to George and Florence (nee Larson) Maza. After graduation from high school, George attended Newark College of Engineering and graduated in 1956. He was hired by Tung Sol Electric in Bloomfield, NJ, and was later transferred to Chicago. He changed his career from engineering to sales and in 1965 joined Motorola. George became a very successful salesman for the company and remained with them for 33 years. He was appointed Vice President and Sales Director for Motorola Semiconductor Products, Inc. in 1987. He subsequently was appointed as the World Wide Director of Strategic planning for Siemens Corporation, Motorola’s second largest external customer. George retired from the company in 1998 and formed his own consulting business which prospered for several years. Besides his work life, he was very active in community affairs and volunteer work. He was a charter member of the Carol Stream J. C.’s with service as both 2nd and 1st Vice President. In 1964, he was elected as a Village Trustee and served a full four-year term as Commissioner of Public Property and Police. He was elected as one of the directors of the DuPage County Fair Association and served in that capacity from 1990 to 2000. During that same period he was also an active volunteer at Central DuPage hospital, working the Saturday night shift in the E.R. for over 10 years. He is survived by his loving wife of 17 years, Kathleen (nee Smith) Maza; his children, Steven Maza, David (Kaye) Maza, Kathy Murphy and Michael (Lisa) Maza; two step-sons, Derek (Katie) Huffer and Todd Huffer; six grandchildren, Lauren, Mike, Andrew, Nick, Jordan and Ethan; and three step-grandchildren, Emerson, Liam and Tyler. George was preceded in death by his parents and his remarkable grandson, Davey. A celebration of George’s life will be held later this year. Memorial donations may be made to the following organizations in George’s name: Wounded Warrior Project P.O. Box 758516 Topeka, Kansas 66675-8516 or donate online using the following link: www.woundedwarriorproject.org Children of Fallen Police Officers Foundation 18 Oak Street #1221 Brentwood, CA 94513 or donate online at www.policeofficersfoundation.org For further info, call Matz Funeral Home in Mount Prospect, or visit www.matzfuneralhome.com.

George M. Maza, 86, of Mount Prospect, IL, passed away on Monday, February 8, 2021, at Advocate Lutheran General Hospital after a long and brave battle with cancer. George was born in Newark, NJ, on December 25, 1934, to George and Florence... View Obituary & Service Information

The family of George M. Maza created this Life Tributes page to make it easy to share your memories.

Send flowers to the Maza family.