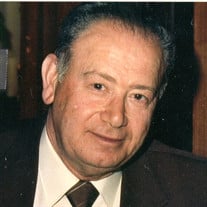 In Memoriam - George Fadel Khoury 1926 - 2019 George Fadel Khoury passed away at home on February 13, 2019, in Mt. Prospect, Illinois. He was 92 years old. The cause of death was cancer. George was born on November 6, 1926, in Mechta El Helou, Syria (Tartus Province). He completed his elementary and secondary school studies at the American School in Mechta, before moving to Homs, Syria, where he worked for the Iraqi Petroleum Company for four years. While in Homs, George took courses at the Orthodox University. He traveled to the United States in 1951 to attend Indiana Technical College in Fort Wayne, Indiana. He later transferred to Chicago Technical College where he earned a B.S. in Civil Engineering. He worked for the Illinois Department of Transportation from 1956 - 1991. George served as President of the St. George Antiochian Orthodox Church Board of Directors for six years. He was an active member of his church community for decades. George also served as President of the Midwest Federation of American Syrian Lebanese Clubs for two years, and President of the Phoenician Club of Chicago for three years. A tireless commitment to community service and the well-being of others garnered numerous awards and accolades for George, including Humanitarian of the Year from the Midwest Federation of American Syrian Lebanese Clubs, Man of the Year from the Phoenician Club of Chicago, and the Illinois Department of Transportation’s Service Award. Throughout his life, George demonstrated leadership, integrity, generosity, kindness, and resolve. He modeled pride in heritage and the courage of one’s convictions. He was a loving husband, father, and grandfather, and a loyal friend and colleague to many who knew him. George is survived by his wife, Joanna (“Bunny”), his sister, three children, three grandchildren, and two sons-in-law. The viewing and funeral service is on Sunday, February 17th at St. George Antiochian Orthodox Church at 1220 S 60th Ct, Cicero, IL. Visitation is from 5pm to 7pm at the church. The service begins at 7pm. In lieu of flowers, donations may be made to St. Jude’s Children’s Research Hospital at https://www.stjude.org/.

The family of George Fadel Khoury created this Life Tributes page to make it easy to share your memories.

Send flowers to the Khoury family.