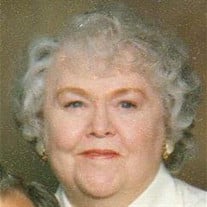 Alice Irene Wieland, nee King, passed away peacefully early in the morning of Oct. 25th at the age of 93. Alice was born in Chicago on Feb. 13, 1922, to Ella and William King. One of ten children, she went to work at the age of 16 to help support the family during the Great Depression. She married Warren Wieland on Aug. 12, 1944, two weeks after his return from England during World War II. Together they had five children; one lived only 11 days because of serious illness. Alice was a devoted mother and marvelous cook. For ten years Warren's job required that he traveled almost weekly and so she did the lion's share of raising the children-and she did it beautifully!! She loved music and, like most of her brothers and sisters, played the piano. She had a beautiful soprano voice and for many years sang in the St. Thomas Becket choir. Alice and Warren were original members of St. Thomas Becket parish and helped build the church. Alice and Warren loved taking cruises and embarked 22 times over the years to places as diverse as the Norwegian fiords, the Panama Canal and the Hawaiian Islands. She is survived by her husband, Warren, and four children, Patricia (Timothy) Ladewig of Denver, Colorado, Pamela Wieland (Mark Riske) of Schaumburg, Paul (Pamela Ann) Wieland of Aurora, and Steven (Debby) Wieland of Lisle. She also has five grandchildren: Ryan (Amanda) Ladewig, Erik (Kedri) Ladewig, Steven Paul (Jaren) Wieland, Lindsay (Rob) Wallace, and Kristen Wieland as well as 4 great-grandchildren: Reed and Addison Ladewig and Emma and Camden Ladewig. She was preceded in death by her parents and all her siblings and their spouses. A funeral mass will be held on Wednesday, October 28, 2015, at 11 AM at St. Thomas Becket Church, 1321 Burning Bush Lane, Mt. Prospect, Illinois. The mass will be preceded by a viewing at the church from 10 AM to 11 AM. Interment will take place at Ridgewood Cemetery. In lieu of flowers, the family suggests that donations be made to the Alzheimer's Foundation.

Alice Irene Wieland, nee King, passed away peacefully early in the morning of Oct. 25th at the age of 93. Alice was born in Chicago on Feb. 13, 1922, to Ella and William King. One of ten children, she went to work at the age of 16 to help... View Obituary & Service Information

The family of Alice Irene Wieland created this Life Tributes page to make it easy to share your memories.

Send flowers to the Wieland family.